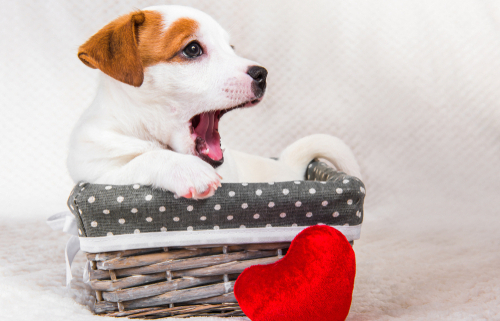 We all know that human yawns are a sign of two things: we are tired or bored.  However, it is a little different with dogs.  Not all dog yawns are created equal.  Depending on how, when, and in what situation your dog yawns, it could mean several different things.  A dog yawn is the same thing as a yawn from a human.  It is a reflex where the mouth opens wide and the lungs take a deep, involuntary inhale.  Keep in mind that there is no way to contract the aspect of a yawn – when it happens, it happens!

There are a lot of theories about why both people and dog’s yawn.  Let’s look at some of the strongest theories on why your dog may have a serious case of the yawns!

They love you!  It is more than likely that yawning symbolizes a bond to their human.

They are stressed.  An occasional yawn is nothing to be concerned about—but if your dog is yawning excessively, it might be a sign of stress or anxiety.  Pay attention to when, where, and how often your dog is yawning. A stray yawn before bed or during a walk is fine. But if you notice your dog is yawning in rapid succession in situations that might be anxiety-inducing—like meeting a new person or attending a training class—chances are, those yawns are a signal your pet is feeling overwhelmed and stressed out.

They are avoiding conflict.  Your dog’s yawn might also be a way to avoid conflict. Yawns may be a sign of passivity; so, if your dog yawns in response to an altercation with a larger or more aggressive dog, it could just be their way of saying “I don’t want any trouble.”

They are tired.  Finally, and most obviously: yawning means sleepiness. One of the most common reasons a dog might be yawning is also one of the most common reasons a human might be yawning. And that’s because they’re tired.  Your dog’s yawn may just mean that they’ve had a long day and are ready to go to sleep. If your dog has a reason to be tired—like spending the afternoon at the dog park or running circles around your home—or if they let out a big yawn right as they curl up to call it a night, chances are, the yawn is just a signal they’re feeling sleepy.

Like human yawns, most dog yawns are completely benign. If your dog lets loose an occasional yawn when they’re bored or tired, it’s nothing to be concerned about.  But if you notice your dog is yawning often or in rapid succession, you want to pay attention. Like we mentioned earlier, excessive yawning—or a string of yawns one right after the other—can be a signal that your dog is in distress.

The Common ACL Tear: What NOT to Do!