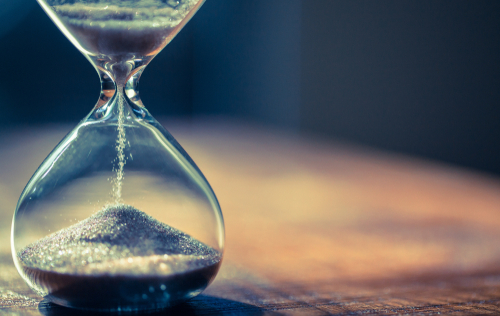 Have you ever noticed that your dog is waking you up at the exact same time every morning?  You are in the right place!  You have probably wondered… do dogs have a sense of time?  There are many reports of how expert behaviorists explain how dogs perceive time and memories.  Come to find out, it is more complicated than you may think.

At the end of the day, the consensus is yes and no.  We don’t know for sure what dogs’ perception of time is, since we are unable to ask them directly.  However, it is obvious that dogs can gauge time.  It doesn’t mean that they perceive it the same way that us humans do though.  Before we get into how your pup perceives time and memory, it is important to note the two different types of human memory: semantic and episodic.

Dogs have a semantic memory.  They can recall verbal commands, body language cues, and other details they have learned throughout their lives.  So, to put the pieces together, your dog wakes you up at 7:00am every morning.  Do they know that it is 7:00am?  Not quite.  Instead, they have picked up on a series of events that, in the past, have meant that it is time to wake up.  For example, perhaps the sun is starting to rise, or they hear the birds chirping outside.

Ultimately, your dog’s sense of time and ability to understand it may be stronger than what you think.  However, there is a lot that we do not know.  While it may be true that your dog hasn’t developed an ability to read the kitchen clock, it is hard to determine what exactly is going on in their mind!

Parvo: What You Should Know
Scroll to top