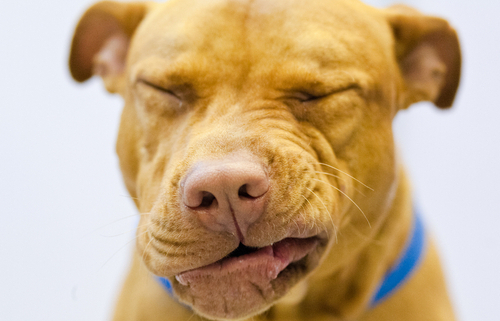 Have you ever noticed your dog sneezing right in the middle of an intense play session?  There are many theories as to why dogs sneeze while playing!  Continue reading to learn more.

The first thing to keep in mind is that sneezing to dogs is not very different from people sneezes.  The main reason why dogs (and people) sneeze is because something is irritating the inside of the nose, such as a pollen.  The body promotes the sneeze to try and get rid of the irritation as quickly as possible.  Interesting fact: there is a part of the brain called the sneeze center which regulates all the muscles and organs needed to create the sneeze.  When dogs sneeze, their eyelid muscles always close shut as well!

We all know that dogs have a very strong sense of smell.  In fact, scientists state that dog’s sense of smell can be 10,000 to 100,000 times more sensitive than a human.  This strong sense of smell can lead to their noses being particularly sensitive to irritants.  Dogs also curl their lips when playing or having fun.  This causes the dog to wrinkle their highly sensitive nose, which can cause a tickle that the body interprets as a signal to sneeze.  We must keep in mind that sneezing is healthy and means that the body is doing its job.

Communication is another reason that dogs sneeze while playing.  When dogs are playing together, they are constantly communicating. One way to confirm that they are simply playing is by sneezing, along with exhibiting various facial expressions and special body language.

Of course, not all sneezes are fun and games.  Some dogs will sneeze due to cold or allergy.  A deep sneeze that comes from the lungs may be a sign of a cold and may need veterinary medical attention.  Occasional sneezing, particularly while playing, is normal. It’s a sign of fun and won’t require any attention!