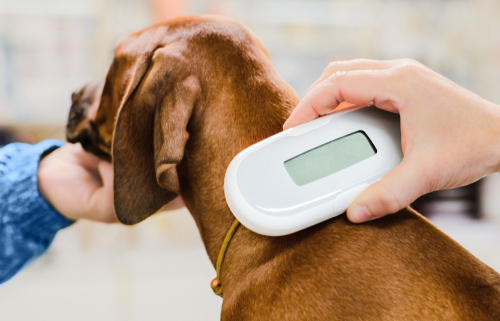 Hundreds of dogs go missing every year and are found, rather bedraggled but perfectly healthy, handed into the local animal shelter which then searches desperately for the animal’s owner.  It’s sad to say that some dogs are even euthanized.  In a recent study involving over 7,700 stray pets, the number of non-microchipped dogs that were safely returned to their owners was just under 22%.

For an average one-time cost of $45 at most local veterinary practices, a microchip can be injected into the dog. It is a small glass cylinder about the size of a grain of rice that contains a radio transmitter and a minute electronic device containing the animal’s ID number. This is done in the same manner as any usual injection procedure, although, to accommodate the microchip, it requires a slightly larger needle. The chip will last for over 25 years, which is well beyond the lifespan of all but the most exceptional hounds.

At this stage it is important to note that this is not a tracking microchip that can be used to pinpoint a dog’s location. The idea behind it is that when a dog is handed into an animal shelter, they can scan the dog for the microchip. This will then give them the animal identification number to search the database to contact the owner. The same study of 7,700 stray pets revealed that dogs with implanted microchips have a 51.2% chance of being reunited with their owners, a near 30% increase over those without.

Based on this information alone, most people would be convinced that a microchip for their pet is a good idea. However, there are a few warnings of which to take heed. In the past there were three microchip frequencies commonly used in the U.S. that responded to scanners on the fame frequency. These were 125 kilohertz (kHz), 128 kHz, and 134.2 kHz. Until recently, these frequencies were mutually exclusive. For example, a microchip that responds to a 125 kHz scanner would not respond to a 134.2 kHz scanner. There were some very sad cases of dogs unable to be returned to their owners, despite having a microchip, because it did not respond to the scanner’s frequency. To alleviate this problem, universal scanners have been introduced. They are used by most shelters in the country, detecting microchips resonating at any of the above frequencies.

Damaged Furniture? We Can Help!