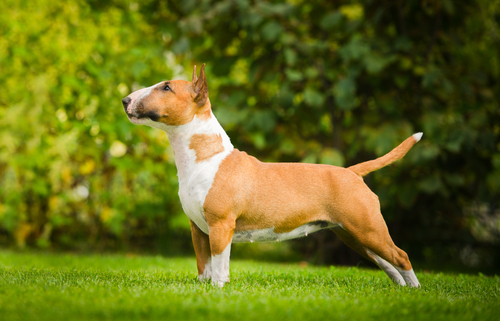 We are extremely excited about our Spotlight Breed of the week: Bull Terrier!  This breed stands out amongst the crowd.  You may recall from the later 1980’s, the Budweiser commercials featuring a Bull Terrier named Spuds Mackenzie.  Many people were captivated by his long, egg-shaped head with pointy ears with eyes that glistened.  This breed is mainly white in color, but sometimes other colors with white markings.

Originally developed in the 19th century, the Bull Terrier was considered a fighting dog, but now they are perfect family companions and show dogs.  The Bull Terrier is a lover, not a fighter.  In fact, they are known for being affectionate to all members of their household, especially children.  With, this is a breed which should not be left alone for long hours.  They want to be a part of your daily activities and feel included along the way!

Bull Terriers need 30 to 60 minutes of exercise, play and mental stimulation daily.  Their strong-willed attitude can sometimes make them difficult to train so early training is suggested.  Owners must provide positive reinforcement techniques while remaining firm and consistent.  We promise that if you put in the effort, they will be great companions to you and your family!

We will leave you with our favorite quote about Bull Terriers.  “When a Bullie is in your life, there is always a reason to laugh!”