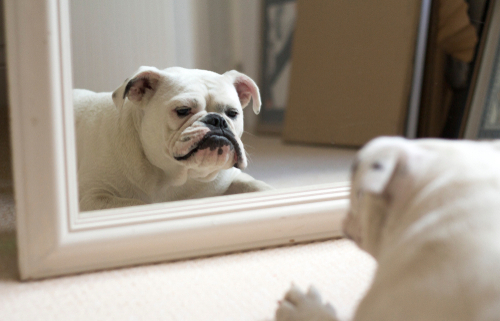 Have you ever taken your dog up to a mirror and they end up ignoring their own reflection?  This is common!  Young puppies who see themselves in a mirror for the first time may assume that they are seeing another dog.  They may bark at their image or even try to get it to play.  Oddly enough, they get used to it and do not pay much attention otherwise.

Let’s get down to the psychological aspect of things.  Over time, the dog learns that it is their own reflection in the mirror.  A study conducted by researchers concluded that dogs disregard themselves as they are simply not vain and concerned with their appearance as higher primates.  Yes, humans included! Researchers also discovered that dogs are considerably less affected by visual events than are humans and most apes.

This makes sense as the most important sense for dogs is not sight….it is smell.  Dogs have a sense of “body-ness” which is the feeling of possessing one’s own body and owning the parts of their body, such as “my paw” or “my face”.  Dogs also have a sense of what belongs to them compared to what belongs to others.  We all knew that dogs are smart, but how many people realize how much psychological aspects are involved?

Take a closer look the next time your dog passes a mirror.  You will now have a much deeper understanding!

Dogs Who Love to Mimic
Scroll to top