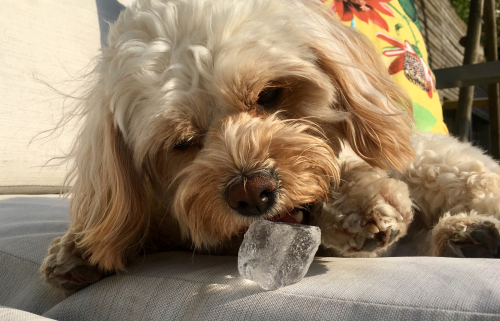 First and foremost, an ice cube is only as good as the water you freeze to make it.  This is exactly what it is – frozen water!  We just wanted to make sure that everyone was on the same page.  Are ice cubes dangerous for our four-legged friends?  We have dug up some information which you may find greatly beneficial!

A few years ago, there was a reported case of a dog ingesting ice cubes and later ending up in a veterinary emergency hospital. The dog had “bloat” and surgery was required to alleviate.  The veterinarian assumed that the bloat was caused by the ingestion of ice cubes.  This story sparked the Internet where several dog owners became intrigued to know more.

Bloat is a life-threatening condition which occurs acutely when the stomach fills with gas and then rotates within the abdomen.  Drinking too much water or eating large amounts of food after exercise can cause the dog to gulp a lot of air along with their water or food which leads to bloating.  We discovered that the veterinarian was incorrect in their assumption that the ice caused the bloating.  In fact, ice cubes can be used to adjust the rate and amount of water that a dog takes in!

Ice cubes are a way to introduce water to dogs recovering from surgery as it prevents them from drinking too much.  So, if you are thinking about offering your pop an ice cube, chances are, they will be more than okay!