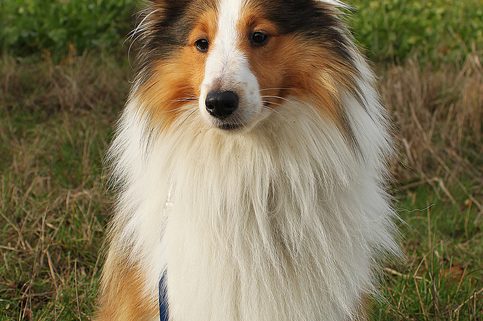 Walker was a breeder of Standard Poodles, dogs who were thought of by many at the time as “sissies.” She knew about the behavior tests that were being held in England for working dogs. An effective and persuasive woman, Walker began approaching dog clubs and breeders with her idea of holding competitive

obedience tests at dog shows. In 1933, in Mount Kisco, New York, eight dogs competed in America’s first obedience trial. The slogan “Train Your Dog,” became popular across the country and in 1934, North Westchester Kennel Club and Somerset Hills Kennel Club held obedience tests at their conformation shows. By 1936, the American Kennel Club had developed and was using the “Regulations and Standards for Obedience Test Trials” at licensed obedience events.

On the road again

Inspired by the public’s enthusiastic response to obedience and dog training, in 1937, Walker, her friend Blanche Saunders, and their dogs went on the road in a 21-foot-long trailer to give obedience demonstrations across the country. In 1941, the New England Dog Training Club became the first obedience club to become a member club of the AKC. Dog training had arrived in the United States!

From the 1920s to the 1950s, Americans of all ages watched with wonder as a German Shepherd entertained and amazed them. Lee Duncan, a World War I soldier, found a shell-shocked puppy in the French trenches. He took the dog home to the states and in 1922, Rin Tin Tin made his debut. Rin Tin Tin was so popular, he was credited for saving Warner Brothers from bankruptcy in the 1920s. Referred to as the “U.S. Calvary’s most valuable soldier,” Rin Tin Tin would make spectacular leaps in raging river rapids, hide under the water from a pursuer, and hold the reins in his mouth to drive a horse and buggy. Rin Tin Tin died at the age of 16 and was buried in Paris. At the time of his death, he was receiving 2000 fan letters every week, showing that people of all ages and backgrounds were fascinated with the idea of a highly trained dog.

A 1938 story involving a collie started a tradition that lasted more than 50 years. Joe was a boy whose family had to sell their collie because they could not afford to keep it. The story touched the hearts of so many people it was eventually made into a novel and feature motion picture with Elizabeth Taylor and Roddy McDowall. “Pal,” the original Lassie, made his debut in 1943 in Lassie Come Home. Rudd Weatherwax was Pal’s trainer and eight generations of Lassies later, Rudd’s son Bob was carrying on the tradition of training Lassies using positive training methods. For many people growing up in the 1950s, Sunday nights were the high point of the week. It was then that we could watch a beautiful, well-trained dog who was so devoted she would travel miles and overcome any obstacles to get to her owner. It was the human-animal bond at its finest.

Conrad Most: The beginning of training curriculums

In the early 1900s, Pavlov was in Russia studying reflexive responses in dogs. In their psychology labs, Thorndike was working on the Law of Effect and J.B. Watson was advocating a move toward the scientific, objective study of behavior. At the same time that these researchers were developing the foundations for operant conditioning, dog trainers were making their own contributions toward developing a technology for training. By the 1930s, Walker and Saunders were using an ancient, unair-conditioned Buick to pull a trailer across the country so that people could learn about training their dogs.

In Germany, Colonel Conrad Most was training dogs and explaining their learning tendencies from a dog trainer’s perspective. Most started training police dogs in 1906, and in 1912 he became the director of Berlin’s State Breeding and Training Establishment for police dogs. From 1919-1937 Most headed the Canine Research Department of the Army, and in 1931 he helped form the German Society for Animal Psychology.

In the 1940s, Most used his dog training knowledge to train the handlers and trainers of dogs at the German Dog Farm, a training center for guide dogs and their blind handlers.

As with many trainers who came from a police or military background, many of Most’s procedures would be regarded as “heavy-handed” by today’s trainers. Nonetheless, it is important to recognize that an early dog trainer had independently discovered many of the relationships between consequences and behavior that Skinner would later describe in The Behavior of Organisms. Most’s 1910 manual Training Dogs was one of the first “how to train” dog books.

Josef Weber came to the US from Germany, where he was an instructor in the Berlin Police Force. In addition to teaching military and police dogs, Weber had developed procedures for teaching guide dogs for people who were blind. Weber became an American Kennel Club judge and is credited as having a critical role in developing the formal dog obedience tests used in this country. Weber advocated training for all dogs and advised owners that they should “be proud of your dog’s manners.”